I don't really have a lot of green fabrics in my stash, I think because it isn't one of my favourite colours, however my garden gives me a nice green fix anytime I want. 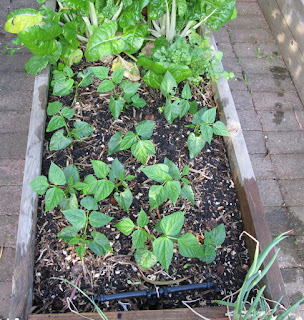 A couple of weeks ago I bought some seedlings and seeds and had a little planting frenzy,  I didn't expect all the zucchini (aka courgette) seeds to come up but they did and I now have six plants, I will have to give some away as there is no way on earth that the Mister and I can eat all the zucchini that will hopefully come from them and I do love zucchini. 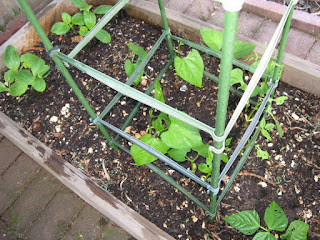 I also sowed some climbing beans which seem to be growing quite well, although a critter or two has been eating some of them, I've checked for caterpillars and put a bit of snail bait down but I would prefer to keep as organic as possible.  Since I took the photo this morning, a couple of the climbing beans have shot up even more and started climbing!!!! The lemon tree which previously lived in a pot was planted into the ground back in April and looks very happy covered with buds which have just started flowering, so hopefully lemons are in my future.

Email ThisBlogThis!Share to TwitterShare to FacebookShare to Pinterest
Labels: garden