I've had one of those weekends where it was hard to find a decent block of time to settle down and get something done.  In the end I settled for making a row of Uzbek Patches and doing a few other bits and pieces that I could do in between doing the other more mundane things. 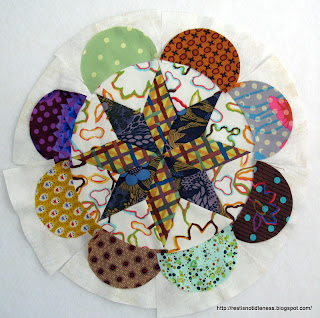 I selected fabrics and cut out the next round of the Museum Medallion, I still have to mark some of them, I might do that tonight, then again I might not :) 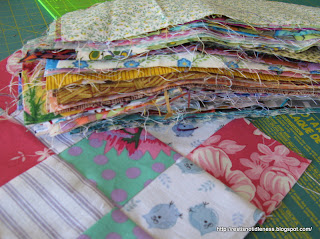 I had all these strips left over from the Soul Searching quilt and I have been seeing different versions of Bonnie Hunter's Scrappy Trip around the World popping up all over the place, so I thought I would make use of my strips in something similar.  My strips are 12 1/2 inches long (a bit shorter than the ones in the tutorial) so my finished squares end up smaller, I haven't been too selective with the colours just pulling out light and dark strips, I suspect that there isn't enough dark to provide a decent contrast. 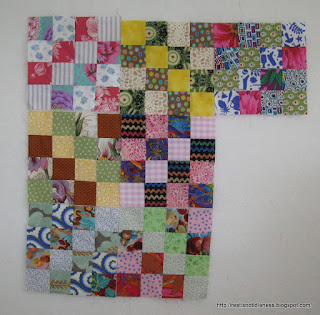 In this photo, I have the lighter squares through the middle of each block, I originally had the dark squares through the middle, but didn't like the effect, but looking at this photo, I'm not sure if I like it this way either.  However, I will make a few more blocks, so I can have a play around with the layouts.  It doesn't take very long to unpick a row especially by this method here which works very well on straight seams.