Some more recent (and not so recent) fabric acquisitions, I have a bit of a fondness for toile although I'm not sure that the red and blue ones can be strictly classified as toile, but the black and white certainly can. 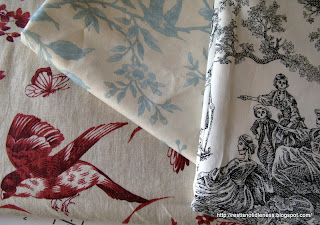 (from the left: Rouenneries by French General, linen/cotton mix, Aviary by 3 Sisters, and Midnight Pastoral by Alexander Henry)

Some borders and stripes,  I think the borders could also be used as a wide stripe, the fabric on the right is a reproduction but I've been looking at it and thinking it would be great used in a Pacific inspired quilt, it kind of reminds me of tapa cloth. 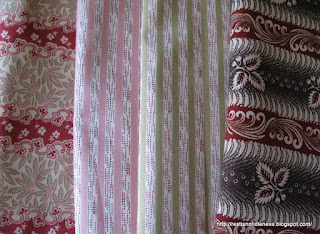 from the left: the first three are from Rosebud Faire  by Renee Nanneman for Andover Fabrics, the last is  from Bancroft  by Judie Rothermel

I have half-formed plans for most of these fabrics but that may change, I was looking at the Rouenneries fabric (I have a reasonable amount of it) and thinking it could make a great top, like this one  but in the shorter version.
Posted by Pip at 04:30

Email ThisBlogThis!Share to TwitterShare to FacebookShare to Pinterest
Labels: fabric

Thank you for taking the time to comment, I will try and reply in a timely manner, usually by email, if you are a no-reply commenter then I will reply directly to your comment which means you will have to come back here to the blog to see it :)