Another use for Quince

This recipe came to me from a blog reader, Annette who had read  the Quince Paste  post.  It is a Poached Quince Cake, I had two quince ripening on the kitchen bench for a couple of weeks which were earmarked for this cake, in the end I only had one quince as the other had rotted from the inside, rather than go without I halved the recipe and this was probably a good thing as although the Mister and I can eat quite a lot, I think the whole cake recipe would have been a bit of overkill for us.

I only used two ramekins to cook the cake which was a mistake as there was a lot of cake batter, (made for a very enjoyable licking of the bowl) so next time I will use four ramekins, this is reflected in the recipe.

If you double the recipe, you will need to cook the cake in a 22cm deep round cake pan and it will take about one hour to bake. 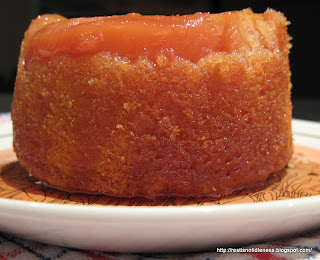 Combine the sugar, lemon juice and water in a small saucepan, stir over moderate heat until sugar dissolves. Bring to the boil, add quince, reduce heat and simmer for around 75 minutes or until quince is a deep rosy pink.*  Remove quince from syrup and drain, (make sure to keep the syrup for later).  Cool quince for 15 or so minutes.  You might find it necessary to add some more water if it evaporates too much.

Using an electric mixer, beat butter and sugar in a bowl until pale and creamy, add the egg and beat well.  Stir in yogurt and flour and mix to combine.  The mixture is quite a stiff one.

Arrange two quince wedges on the lined base of each ramekin, then divide the cake mixture evenly between each ramekin, smooth the surface and bake for 15-20 minutes or until a skewer comes out clean.

Cool in ramekin for 10 minutes.  Run a knife between the cake and the ramekin and turn the cakes out onto plates with raised edges (you'll be sorry if you don't).  Bring the reserved syrup to the boil over high heat and boil till slightly thickened - about 5 minutes. 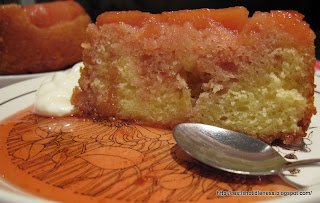 * The quince I used were tender after about 45 minutes, but I kept on cooking them till they turned pink, I needed to add a bit more water as well.

** I found that the fan forced setting browned the cake too quickly so I  used the Bake option.

*** The ramekins I used were Ikea ceramic ones with a diameter of 12cm and an inside depth of 5.5cm

Thinking ahead I have preserved some jars of quince so that I can make this cake later on in the year  :)