I worked on these two blocks from the Sue Spargo Red Clover wall hanging which I am making.  I found it relaxing to choose the different coloured wools and felts for these blocks.  I've basted the star down and the rest of the pieces are just placed there, ready for basting later on. 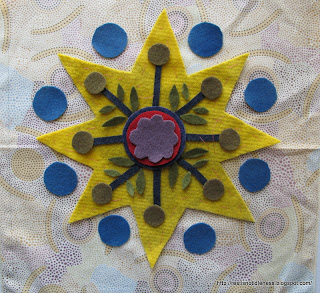 I've used linen instead of wool as the background fabric on the bluebird block and I've also used a cotton bias for the branches instead of wool.  The bias is stitched down and I just have to whip stitch the birds, leaves and berries.  The birds still have another wing to be appliqued on after the bodies have been stitched in place. 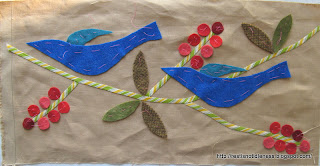 Quite pleased with how this little project is coming along, as always the hardest part is selecting the colours and cutting out the little pieces.  Once the blocks are finished, I can put them together, then add the borders, do the applique on the borders and then start embellishing the blocks.
Posted by Pip at 16:59:00