Oops, I hadn't realised how long it had been since I had blogged (over a month) doesn't time fly when you're having fun!!!

I was idly looking at the quilting fabrics on Ebay a while ago and saw some charm squares I quite liked the look of so I put a bid in and won them. They arrived quickly so I had to start thinking about what to make with them, I thought a quilt would be nice, but had no idea of what type, so I left the fabric sitting around on my desk for a few days while I mulled it over. 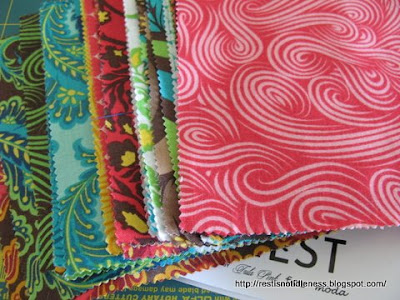 Anyways, after some days I was no closer to an idea and was beginning to think I would just have to make a chequerboard with the squares and some blue material that I already had. It so happened that our local library has a book sale every school holidays (20c for a paperback and 50c for a hardback - bargain) so I went along to see if there was anything there that interested me, there were a lot of people waiting for the library to open, some had even come prepared with boxes to carry off their booty. I found a few books and a old quilting magazine, flicking through it in the car I saw this: 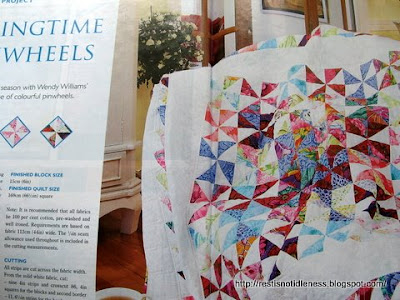 and thought, yes, I could do something like that, so when I got home I started sewing and ended up with a few of these: 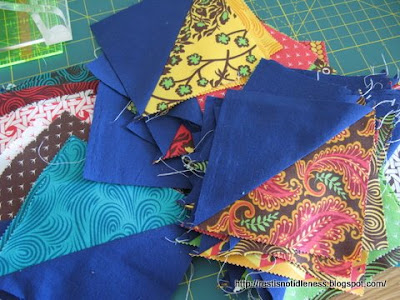 but not enough to make the quilt top, I needed another two packets of the charm squares so back on to Ebay I went and I found a set of squares (in Malaysia of all places), managed to win them, but I still needed one more set so I would have enough for the border of triangles, to cut a long story short I found some more so I was able to finish the quilt top, but I still have to sandwich, quilt and bind it (although I have everything I need to do that). 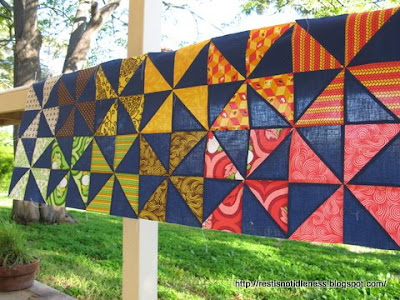