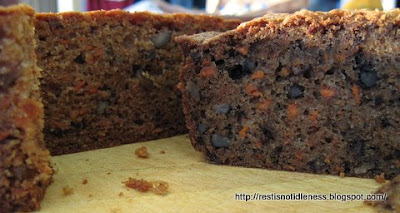 Class 60 - Carrot Cake, iced, square or round, 23cm maximum
I restrained myself this weekend and the only baking I did was to make carrot cake, although I did make two, one square and one round, two different recipes as I wanted to see which one I preferred. (to eat that is)

The cake on the left was a new recipe that had less sugar and oil in it than my normal recipe (the cake on the right). On the first tasting I could taste the raising agent (baking powder and baking soda) in the new recipe, but on successive tastings it wasn't so obvious. I was going to give the neighbours half of each cake to try, but that hasn't eventuated as both cakes are fast disappearing. I didn't bother icing them this time as I wanted to get the true taste of the cakes.
Posted by Pip at 17:29:00