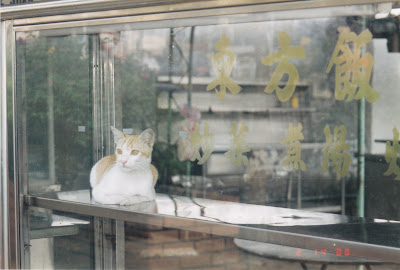 We were out walking in Georgetown early one morning while on holiday in Penang, when we saw this lovely cat (in the picture above). The night before when we walked past this very spot, there was no cat there, instead there were piles of noodles, vegetables, etc all the things necessary for making Hokkien Mee or Char Kway Teow (I forget which now). I remember thinking, I'm glad we don't eat at that stall, but I suppose what you don't know doesn't hurt you, and I have seen far worse while on rambles around Penang and after you have been there a while you tend to close your eyes to that sort of thing.

The two guys in the picture below used to make roti for our morning snack, they got so used to us coming in they would just ask "Dua roti and kopi" (2 roti and coffee) and we would say "Terima Kasih" (thank you) 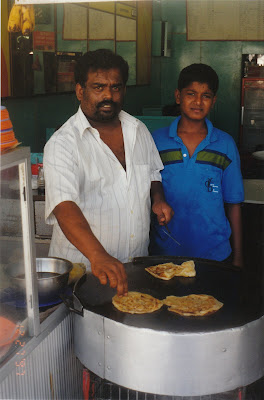 I have tried making roti here but it isn't quite the same and I can't get my dough stretched out as thin as they do, nor can I throw it in the air and twirl it around without making a horrible mess. Thinking about it now has made me think I might have another roti making attempt this weekend, maybe a curry as well.
Posted by Pip at 12:57:00

Email ThisBlogThis!Share to TwitterShare to FacebookShare to Pinterest
Labels: photos