In February last year I participated in the Everyone's got an X Sew-along held by Andrea Tsang Jackson from 3rd Story Workshop  It was held over six weeks and didn't take too much time to cut the fabric then do the piecing each week. 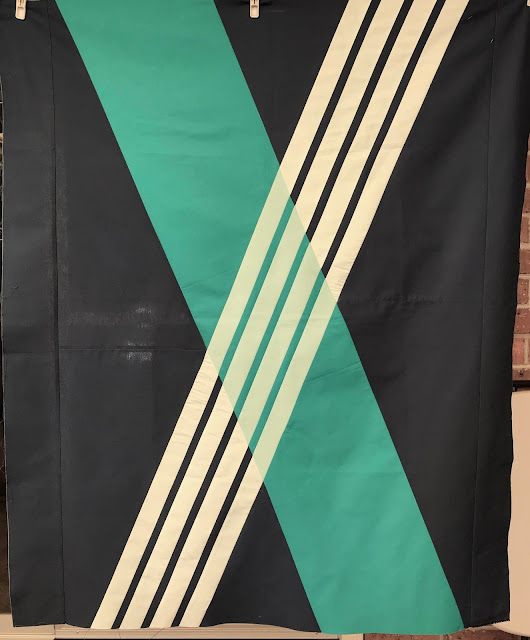 The hardest part for me was selecting the fabrics as I wanted to only use fabric from the stash, and I had to be mindful of whether there was enough yardage available.  I finally settled on my fabrics, using a dark navy for the main background as that was the fabric I had most of. 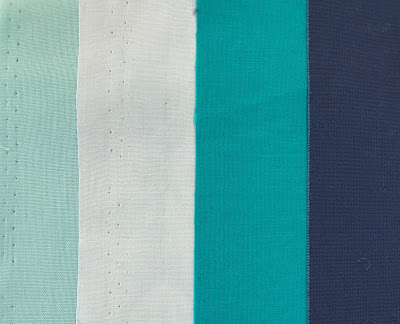 Then it was a matter of finding the other three fabrics, although the second strip looks quite white when it is seen in real life you can see it is a very, very pale aqua, it just doesn't photograph very well.

Twisting the night away

This block was relatively simply to put together, I found the instructions for it in Modern Quilts Unlimited #20 (this magazine is no longer published)

The designer is Missy Shepler it is not really a block but rather a pattern for a tote bag, but I think it would make a great quilt, I'm already imagining the possibilities. 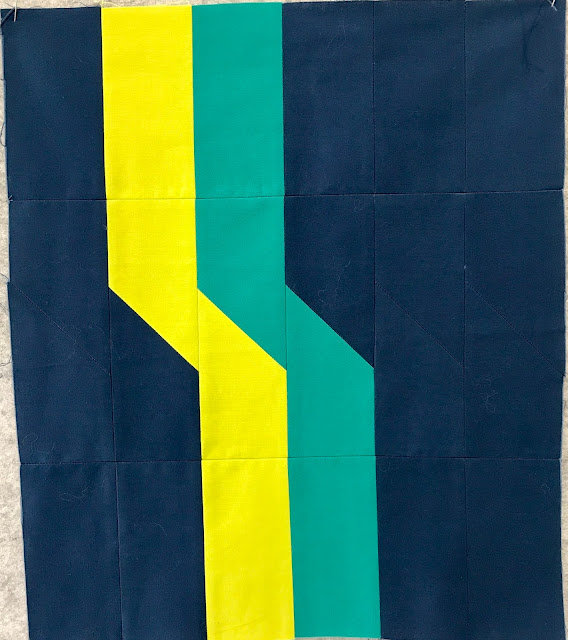 This mini quilt pattern was a free pattern from Broadcloth Studio the Modern Miter mini quilt pattern,  I love the graphic look of this, it was quite easy to make and I think the colours you choose for this would be quite important to the overall look of it.  I would love to make a bigger quilt using this block. 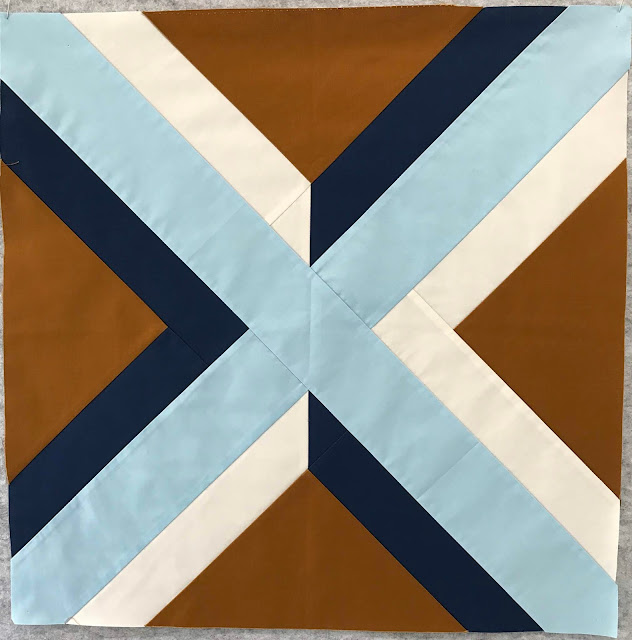 The block below illustrates minimalism and negative space,  the instructions for this block were by Riane Menardi in Modern Patchwork Mar/Apr 2018.  In the article Riane says " Minimalism is a paring down of elements, stripping away unnecessary parts of the design to create a nice, clean aesthetic.  Often minimalist quilts use only a few colours.  The focus is on simplicity in design and execution." 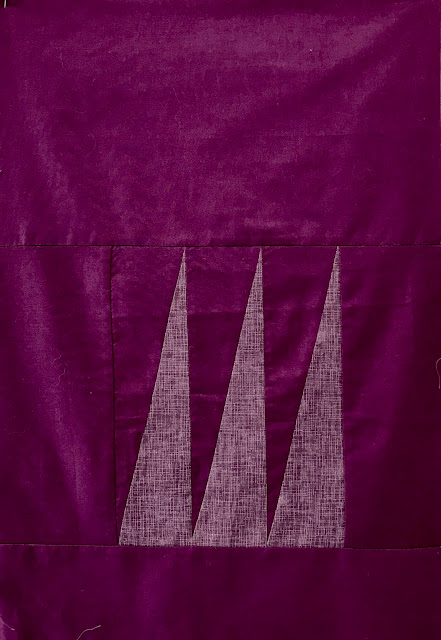 My quilt was accepted into Quiltcon!!

Last year I entered a quilt into Quiltcon, it was my entry for the Me+You fabric challenge.   The Modern Quilt Guild sends out four fat-eighths of the challenge fabric to members who register for the challenge and then you make a quilt using at least three of the fabrics and enter it into Quiltcon. 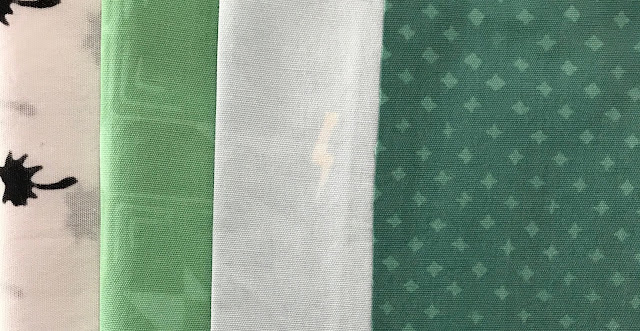 For MQG members living outside the USA there is an extra challenge in finding more of the provided fabrics and the allowed fabrics in their own country.  You can of course source more fabric from the US but with the current exchange rates and adding in the postage cost it can be an expensive exercise.

While waiting for my fabric bundle to arrive, I found two retailers in Australia who had some of the Indah Solids  available, so I ordered Irongate, Dijon, Teal and Tiger, as I thought they were colours that might work with the challenge fabrics. 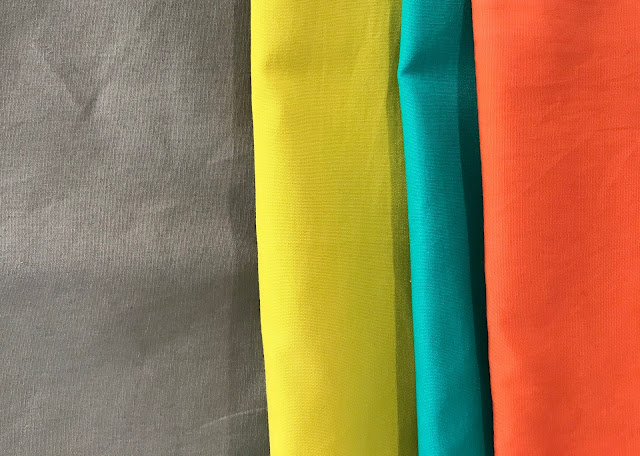 I didn't want to spend too long making a quilt so my quilt is small, plus by making a small quilt there would be leftover fabric for another quilt if my original idea didn't work out.

I used EQ8 to work out a simple log cabin quilt layout, then just recoloured blocks and moved them around until I found something I liked.  The blocks were paper foundation pieced and finish at 3" square. 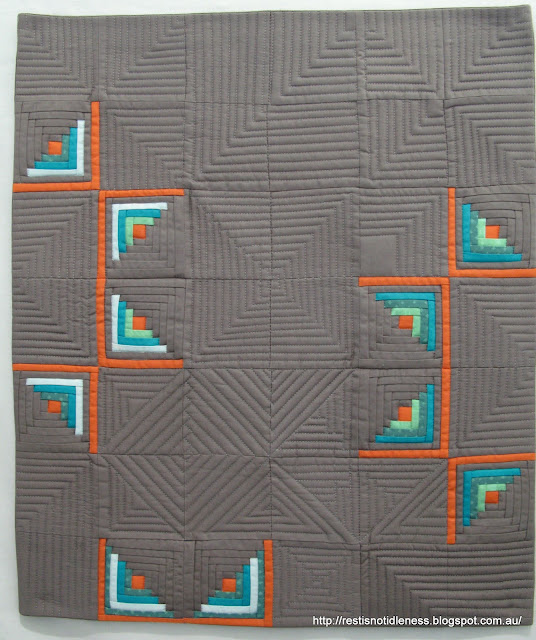 Since our bathroom renovations were still in progress, I was limited to my sewing station set up in the family room.  It didn't take too long to make the 10 log cabin blocks, cut 32 grey blocks and piece them into a quilt top.  I finished the ditch quilting and then the quilt sat and waited and waited .... 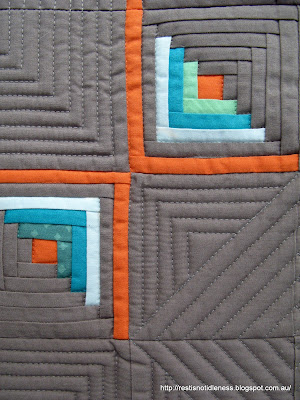 The deadline for entry was looming (2 days away) so I made a massive effort, got the quilting done, sewed the facing on the front but glued it to the back so I could take photos for the entry then sent the entry off and promptly forgot about finishing it until the acceptance email dropped in my inbox.  I then had to finish sewing the facing down, add a hanging sleeve and label then get the quilt posted off to Austin to be received by 22 January 2020.

The quilt was posted off a week before Christmas, International Express with tracking and signature on receipt.  I expected that the quilt probably wouldn't arrive in Austin before Christmas because of the Christmas rush but I didn't expect the quilt to apparently disappear.  Tracking showed that Australia Post had "got it" but that was it, my communications with Australia Post confirmed that they had "got it" but had no idea where it was but they would look for it and get back to me. 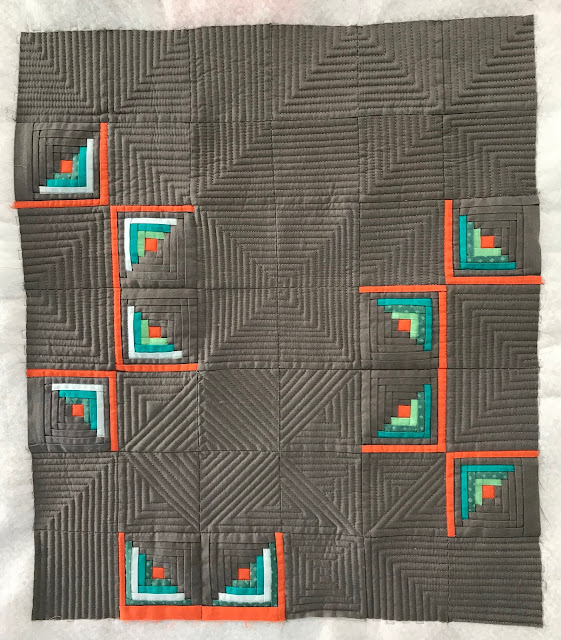 In the meantime I started making a duplicate quilt, preparing myself for a worst case scenario of the quilt being totally lost.  I figured I could make and finish a new quilt in less than two weeks and then post it so it would arrive before the cut off date.  I also found another tracking website where I discovered that my quilt had arrived in the US and was sitting at Los Angeles airport waiting to be sent to Austin, where it arrived a few days later and was signed for. (happy dance from me)  At that stage Australia Post still had no idea where my quilt was, two days after I knew the quilt had arrived they finally sent me an email saying the quilt had arrived at the destination.

Some might say all that effort making a second quilt was for nothing but it helped keep me calm and not worry about where the first quilt was.  I had done everything I could to locate the first quilt and it was beyond my control so it seemed that making another quilt was the logical thing to do, as I wasn't going to miss out on having my quilt hang at Quiltcon.

In the article Jen made two quilts, one using solids and the other using more traditional fabrics, I didn't have time (or the inclination) to make two quilts instead I made two blocks: one with solids and the other with French General, I think it is interesting how different they look even though they are the same block.  The difference is even more marked when it is a complete quilt. 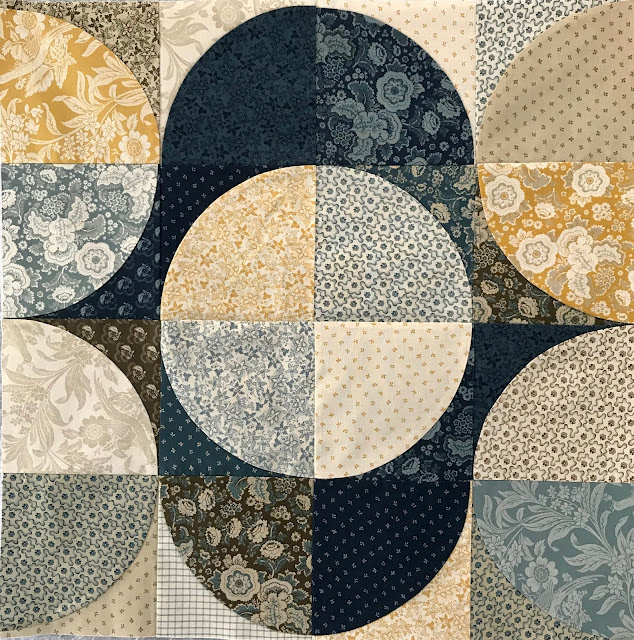 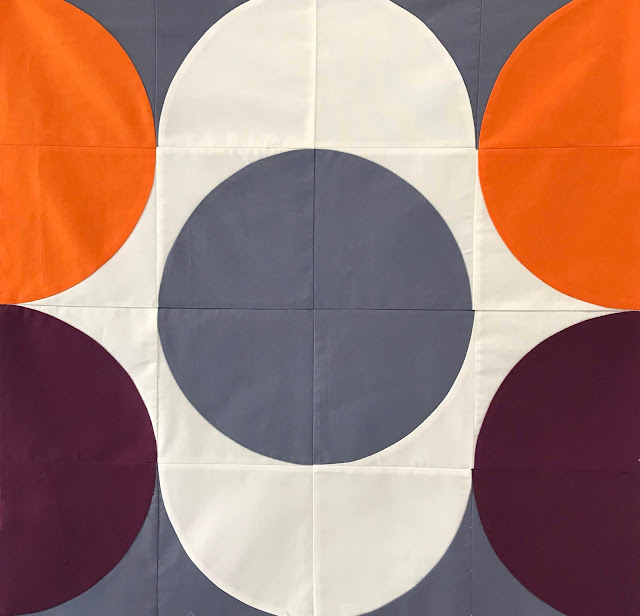 The first block illustrates colour blocking, there was a great article on Alternate Gridwork and Colour Blocking in Modern Patchwork Nov/Dec 2017 (no longer published) and the article was by Riane Menardi.  Colour blocked quilt components are simple: graphic colour palettes and alternate gridwork. 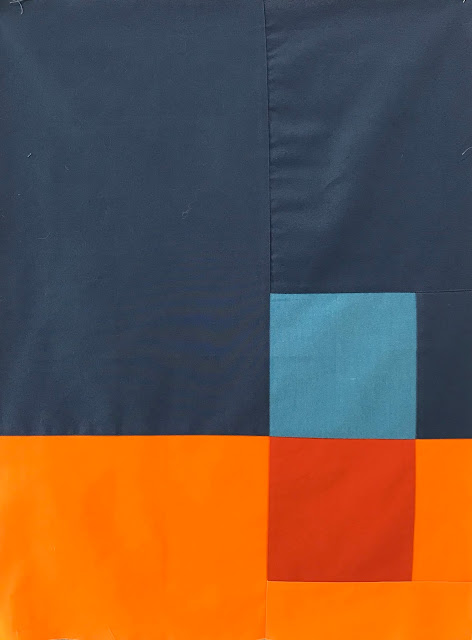 The instructions for the mini quilt below were from Modern Patchwork Jan/Feb 2018, the quilt uses bias tape appliqué to create contrasting accent strips on the background. the big stitch hand quilting helps to accentuate the high-contrast theme.  Using two colours makes it quite minimalistic and striking.  It would be interesting to make this with a pale grey background and use a very pale blue or pink or even a slightly darker grey for the strips. 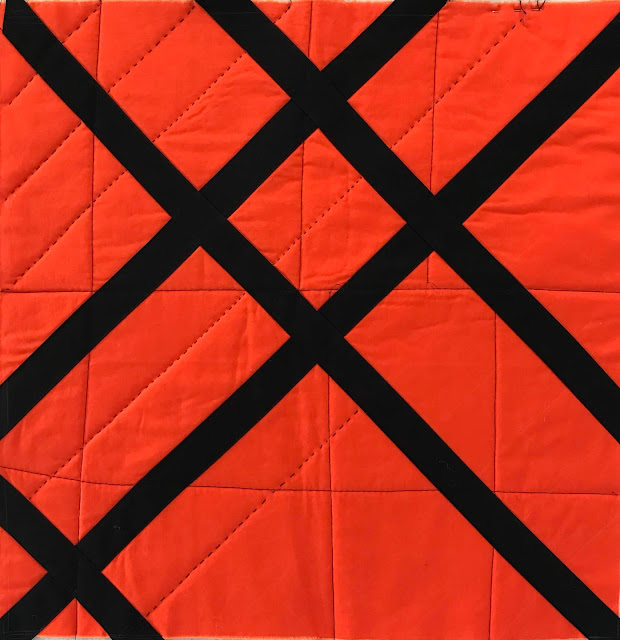 These two blocks are essentially the same but one is made with using two colours and the other with a variety of colours plus a print.  As I was using fabric from my stash it gave me the opportunity to try out different colour combinations that I wouldn't normally make. 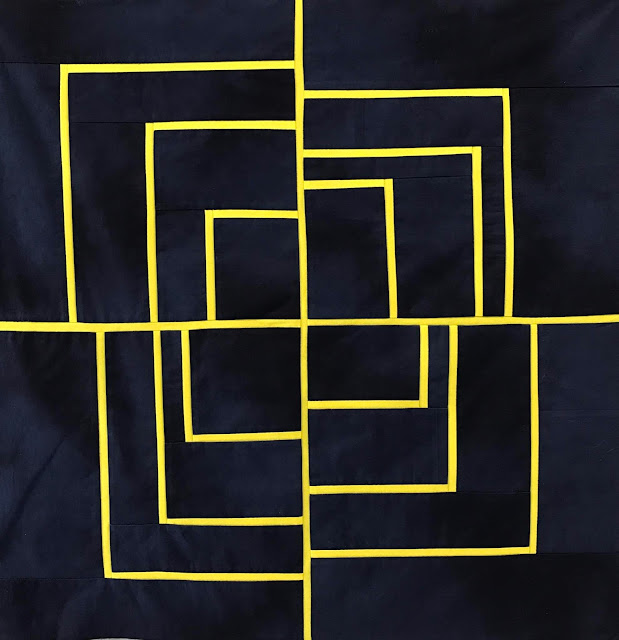 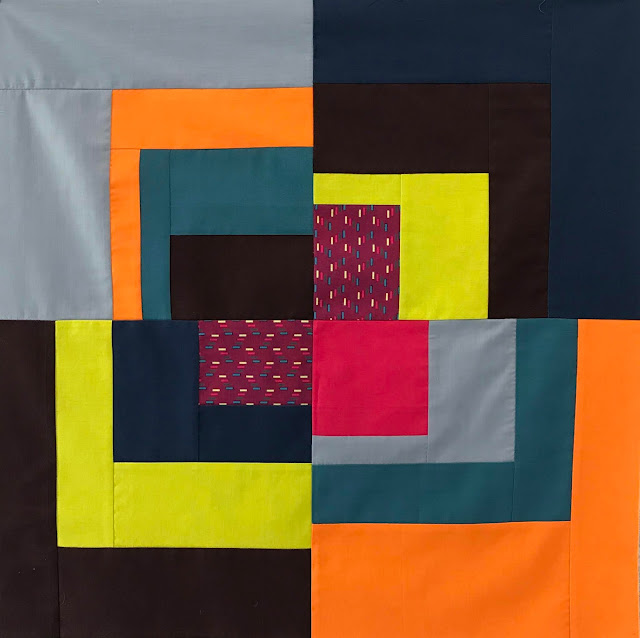 Last year our modern group was asked to do a demo of Modern Quilting.  I happen to think that Modern Quilting isn't something you can demonstrate, it is more of an aesthetic (a set of principles underlying the work of a particular artist or artistic movement). 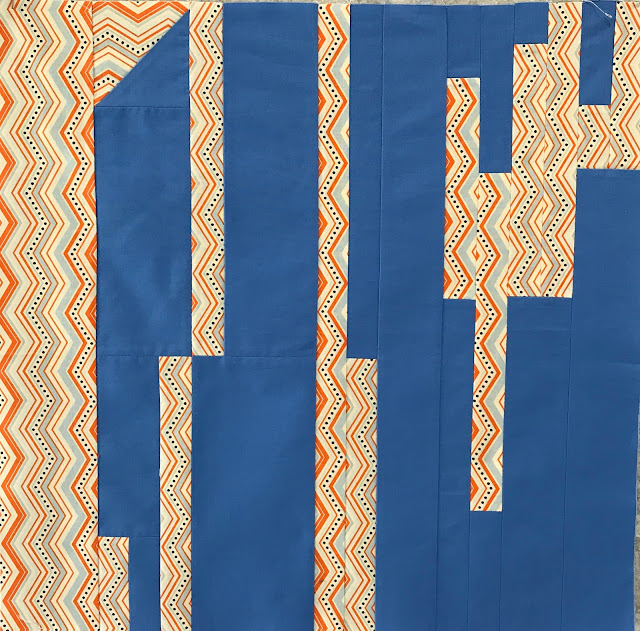 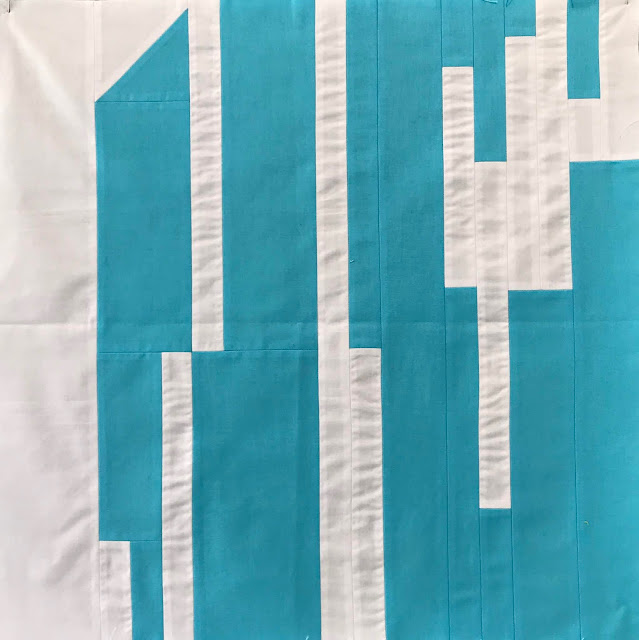 I made these two Covington blocks from the Quilt Local book by Heather Jones, they are about 20"x20"  In the book Heather said that she was inspired by The Ascent, a  residential building in Covington, Kentucky which was designed by architect Daniel Libeskind and built in 2008

It is interesting how they look quite different when using only solids or when a print is combined with a solid. I think four of these blocks pieced together would make a nice small quilt, I must try it out in EQ8 and see what it would look like.
Posted by Pip at 05:30:00 2 comments: Links to this post

Trip around the World

Another fairly long term project that I finished off last year was my Trip around the World quilt, the last time I blogged about it was when I was quilting it and I was about quarter of the way through.  I made the mistake of quilting a corner and ended up with quite a wrinkle halfway up the top, so I had to undo some of the quilting and work my way back to the corner.

I had originally planned to use the grey striped fabric for the binding but it wasn’t going to work so used the white print (which was also the backing fabric) instead which worked out much better. 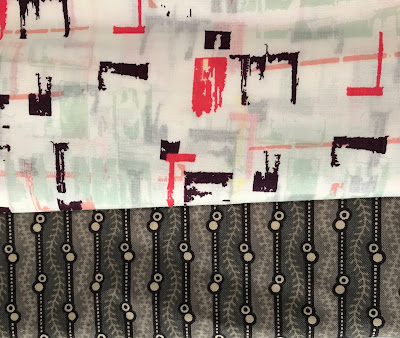 I entered this quilt into our guild show and was rewarded with a second place ribbon for my efforts. 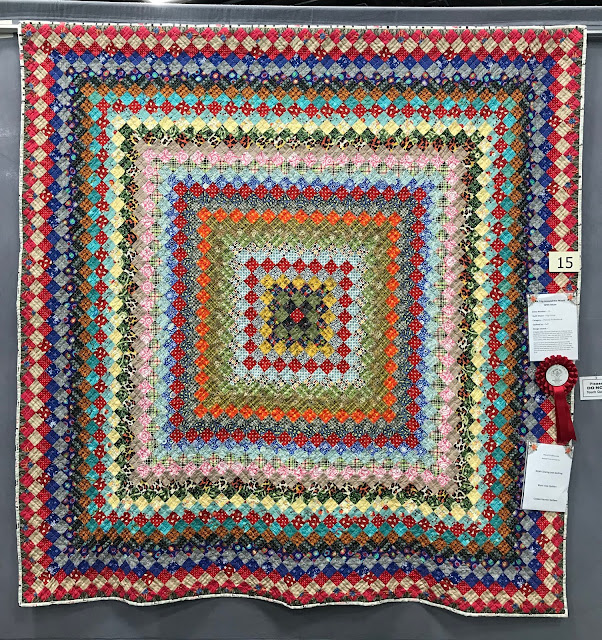 This quilt holds quite a few memories for me as I used to Skype with my mother every weekend and while she talked I would stitch blocks together. Sometimes if my sister Jenny was at the family home she would use her iPad to FaceTime with me and then I would show Mum how the quilt was progressing and what fabrics I was going to use in the next few rounds.  She was a bit doubtful about some of my choices eg “that’s a bit bright isn’t it? or “do you think that will work?”

I’m a bit sad that Mum never saw the finished quilt, but I know she would have been pleased with how it turned out and even more pleased that it won a ribbon.  I found out after she died that she quite enjoyed bragging to her friends about the ribbons my quilts won.

I finished a Free Wheeling Single Girl (FWSG) flimsy end of 2018, and quilted it in time to enter our Festival of Quilts in 2019. 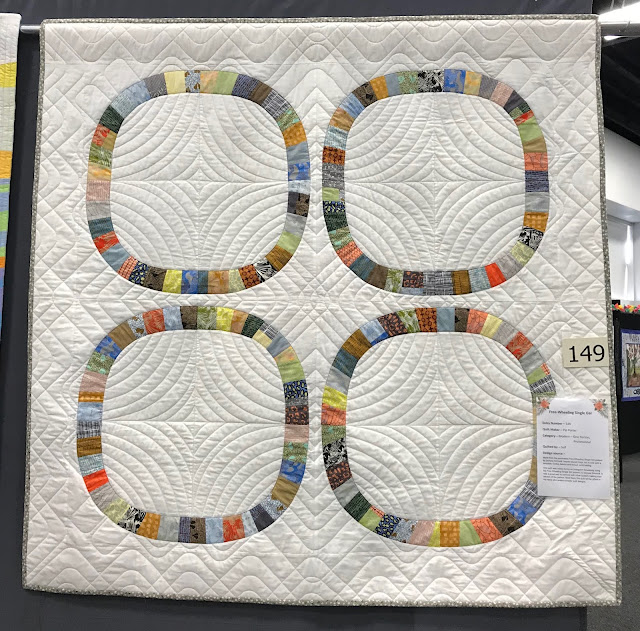 This was another quilt that I enjoyed making, it was quite fast to put together.  I quilted it on my Simply 16 using a ruler that I got the Mister to cut for me, it was based on the shape of the arc.

I used some Denyse Schmidt fabric for the binding

Sometime this year I'm planning on making another FWSG, I already have the fabric and just need to block out some for making it.